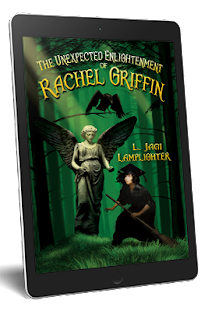 _____________
The Blurb:
Roanoke Academy for the Sorcerous Arts – A magic school like no other!
Nestled amidst the beauty of New York’s Hudson Highlands and hidden from the eyes of the Unwary, Roanoke Academy is a place of magic and wonder. It offers everything a young sorceress could desire—enchantments, flying brooms, and the promise of new friendships.
On her first day of school, Rachel Griffin discovers her perfect memory gives her an unexpected advantage. With it, she can see through the spell sorcerers use to hide their secrets. Very soon, she discovers that there is a far-vaster secret world hiding from the Wise, precisely the same way that the magical folk hide from the mundane folk.
When someone tries to kill a fellow student, she investigates. Rushing forward where others fear to tread, Rachel bravely faces wraiths, embarrassing magical pranks, mysterious older boys, a Raven that brings the doom of worlds, and at least one fire-breathing teacher.
Described by fans as: “Lovecraft meets Narnia at Hogwarts”, The Unexpected Enlightenment of Rachel Griffin is a tale of wonder and danger, romance and heartbreak, and, most of all, of magic and of a girl who refuses to be daunted.
Curiosity may kill a cat, but nothing stops Rachel Griffin!
______________
The first, delightful installment in Rachel's series of academy misadventures.
There are some fairly obvious surface comparisons to certain other magical student novels that can be made with this story but I assure you, they do not go deep enough to describe what you're really getting.
Plot:
The novel is tight, a spaghetti bowl of plots and subplots that all come together for a satisfying conclusion, with just enough loose threads to draw us into the next episode.
Every elements serves a function here, with no words wasted, drawing a wider world around Rachel that will be expanded upon in the following books.
There's action, drama, suspense, and even elements of horror. And even in spots where the action slows down for conversations and Rachel's thought life (it is primarily targeted at teen girls after all), there's always some riddle at the fore and something new to figure out, which of course is the young sorceress's forte.
Character:
Rachel herself is certainly competent in multiple areas, but she is no paragon or Mary Sue. She struggles with everything a teen girl should, even one who's used to generally being obedient. All of her weaknesses are attacked and her strengths are put to the test.
Through every scene, Rachel's general goodness, and her curiosity, carry us through to the next big beat.
There are a lot, and I mean a lot of other characters. It makes perfect sense that through Rachel's eyes we see and learn details about each of them, even if they don't have huge parts to play in the main plot. It's a school, there's a lot of people!
In some stories the huge supporting cast could tax the memory, but everyone is drawn with a strong silhouette and Lamplighter does an excellent job of using Rachel's perfect memory to jog our own wherever it's needed.
As could probably be expected from a male reading the story, my favorite character is the 'dragon slaying' orphan Siegfried, with his unflappable nature, reckless courage, and cute dragon familiar.
Craft:
Other authors (including mainstream ones) wish their books were written this strong. The plot structure worked out perfectly, with an extended action set piece to bring all the clues and surprises together. I found nothing out of place and everything to taste. The editing was clean and thorough.
More importantly, Lamplighter is simply talented. There's whimsy where it's needed and seriousness where it's called for. The voice of Rachel's POV is strong, pulling us deep into her head for the duration.
Critique:
If I nitpicked, maybe I could possibly find something to critique, but likely it would have to do more with my personal taste and position outside the demographic for this novel than any technical issues. It's a very good book.
In a saner world, Lamplighter would have a shelf in every Barnes and Noble and fans of hers and the Hairy Porter would be duking it out in online forums to bestow the ultimate title of Best Magical Academy Series. Jagi would have my vote.
Get your copy at Silver Empire today!
at July 31, 2021