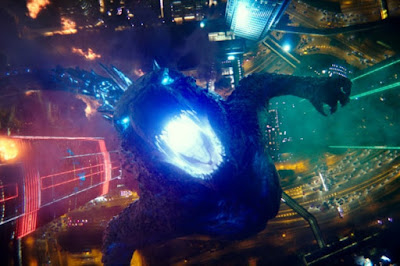 Really it's more just some quick thoughts about it, for various reasons, one of which is that it's hard to say anything new about the cheeseburger everyone else has already chimed in on.

And that's really what the movie is. It's a popcorn kaiju flick that really belongs in the summer months.

A very small percentage of films like this (not just kaiju, but other potentially 'brainless' genres) will hit the scene with unexpected depth or artistry, such as the original Gojira, Shin Gojira, and perhaps a few others. Most exist to give monster-lovers what they want - big monsters fighting and destroying things.

This movie does that, and does it reasonably well.

The human plot is predictably (and understandably?) simple, using them primarily as an excuse for us to have POVs in the story's various locations, and secondarily as a source of humor.

That bit is one of my biggest complaints about the script. The humor is terrible. I'd prefer the cheese of goofy Japanese side characters to this style of humor any day. Despite being set up as hyper-competent in their fields, the two male leads are framed as clueless goofballs, a quality which emasculates the African American Brian Tyree Henry somewhat more than his counterpart, to the movie's detriment. The main issues there are that 1. I would have liked a strong male lead and 2. while scientific and engineering geniuses might be awkward, this is not the type of humor you'd expect from them.

The adult female lead, Ilene, doesn't fare much better in the character department. She escorts the only character that matters, Jia, and doesn't do much else.

It's easy to have empathy for Jia of course, especially as a parent. Small, deaf, child, big eyes. That's really all it takes. But she plays her part well enough. If anything should have been expanded in the human department, it should have been her relationship with Kong. There is a solid tradition of children connecting with the monsters of kaiju films, and it might have been interesting to see a deeper dive with good writing.

The teens are forgettable and pointless. Millie was wasted and given an unlikeable character.

The villains are villainous, and that's just fine. It was a little bothersome to me that Maya, the villain's daughter, and most attractive character, existed only to reveal the predictable twist and then die. Not that eye candy is much of a thing in most kaiju films, but it never hurts.  I'm not a sensitive viewer but I did note that she was also shoehorned into the 'evil Asian girl' trope. Whoops.

The hollow earth and conspiracy angles fit nicely in this Monsterverse setup, and I enjoy that kind of stuff anyway, so it gets an A in the writing department.

One last bit concerning the script I'm tempted to critique is the amount of Godzilla in this Godzilla movie. Kong is really the protagonist, with Godzilla framed as the villain. It works, but I'm a G man and would rather an excuse for them to have equal time, even to the detriment of the plot (which I wouldn't consider a given).

On to what matters - the kaiju themselves.

Visually it looks good enough, probably better in a theater. While the CGI is decent, there's something about suits and models that computers can never touch. Overall, Shin Gojira was more visually believable, and if I'm not mistaken that movie leveraged both types of visual effects.

If anything bothered me visually, it was that Godzilla seemed to have been scaled down to Kong's size rather than the other way around. I understand various reasons for that, such as wanting Kong to be able to hold onto a skyscraper or two, but it nagged at me seeing Godzilla as being small. Especially after the apparent scale of the kaiju in King of the Monsters, this was sometimes jarring.

Minor spoilers in the next section. Skip if you don't want to hear fight details.

The fights are good too, with some real tension over Kong's submersion in the ocean, where Godzilla is right at home.

It bothered me that depth charges would not be enough to wrench Kong from Godzilla's grip in the ocean, and if they were, they'd have injured the monke too.

The Hong Kong fight is the best one, both during the main fight and after the final 'twist' which was actually spoiled in a trailer. I was surprised when some of the action in the main G v K fight pulled me in as well as it did. The monster posturing, roaring, and really hammering their strength home was all very enjoyable. Naturally it did my atomic reptile heart good when Godzilla broke some dumb monke ribs, but I was truly impressed at the fight choreographer/animator's use of Kong's flexibility and speed to disrupt, dodge, and stunlock Godzilla's fire breath. Even as a G fan I had to smile at Kong's moves.

Now, should something that big be able to move like that? No, but we don't mind. This is not a place for realism.

The 'twist' fight was also great, if a bit short. Kaiju teamups are always welcome. The 'twist' looked nice as well, though I would have preferred a more traditional rendition - more Megazord style and less Transformers. Still, his special moves and laser breath looked awesome. I'd love to see him come back.

Really, that's it. It's an above-average kaiju film (if that makes sense with the number of them that we actually get in a year) and a solid installment in the Monsterverse. If you like kaiju movies, give it a shot.

You know what else has a hollow earth and kaiju?

How Black the Sky is a fast-paced tale of heroes coming together to face a threat from deeper in the earth that they don't understand. Magic, fighting, monsters, violence, betrayal, and transcendence. 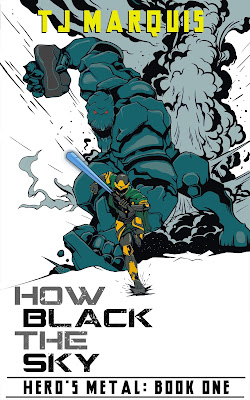