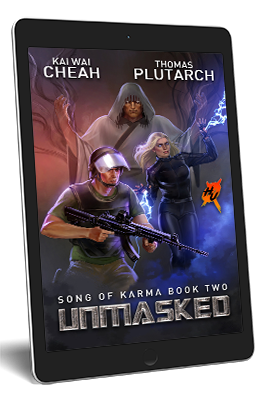 Problems are stacking up for former police officer Adam Song. His court case for killing a drug lord’s son in the line of duty approaches, and it feels like all of Chinatown…and superherodom… are on trial too. The city is a powder keg, and Adam might just be the fire that sets it off.

He has to keep his head low and pay his bills until the entire circus is over. An old spook friend from his military days has a tempting offer for him, but Adam isn’t sure he wants to go back to that life. Government favors come with strings, and Adam is tired of being a puppet.

When his old friend, the abbot of Bright Moon Temple, is threatened from abroad, Adam takes the job to defend him. He needs the money even if the temple can only pay half the normal rate.

What should have been a simple bodyguard job spirals out of control. Even more bodies stack up on Adam’s watch, each one feeding the coals of anger in Halo City.

Can Adam save the Abbot and keep Halo City from burning itself to the ground? And do it all without calling in a favor that will turn him into a shady black-ops weapon?

And who is the shadowy supervillian from Serenity City fanning the flames? Read Unmasked today to find out!

This is our second outing with Adam Song, aka Amp, in a tense and tightly plotted story with thriller and procedural elements. He’s a no-nonsense kind of hero, willing to use maximum force to defend the innocent, much like the Punisher, but without a hint of the Marvel hero’s anger and possible psychopathy.

As you can see from the blurb, and if you’ve read book one, Unmasked comes fully armed with multiple sources of tension, primarily the threat of Adam’s conviction for excessive force. Movement from one plot point to the next is smooth and efficient, no time wasted.

If a scene’s not action packed, it’s setting up a mystery. If not mystery, then intrigue, and just as an answer is revealed, Adam is forced to lay the smack down on his foes. Truly engaging and enjoyable.

Adam himself is developed further from book one, as his nearly supernatural focus and patience are stress-tested intensely.

Side characters are distinct and get their jobs done. Foremost among them is Adam’s abbot friend, who gets developed further from our brief interactions with him in book one. I really enjoyed this one, especially the interplay between his religious beliefs, martial practice and Prime power (unlimited stamina).

My second favorite side hero was Bloodhound, whose special powers you can perhaps guess from his name. We don’t necessarily go too deep with him, but he was still fun to have around.

Cheah’s got good chops. If you follow him on his blog or Twitter, you know the man writes like a beast, and it shows. Keywords for his prose could be lean, efficient, yet detailed (where it counts).

In particular he’s got an aptitude for fight sequences, so if you enjoy getting really crunch with the punches and bullets, this is the author for you.

Cheah’s writing often comes off slightly dry to me, apart from occasional bits of humor. And yet the author’s voice feels strong, pointed, direct and not wasteful of words. I never feel the temptation to skip or skim, because the things he’s describing matter to the story and the characters.

If I could wish for anything more from Cheah’s prose it would be a slight loosening, allowing a little more humor through onto the page. My brain always places him on my Neal Stephenson shelf, so that may account for this opinion to some degree.

No matter what he does next I’m happy to follow this author through his next million words and see what comes about!

It's E3 time - an avalanche of trailers and teasers and a weird mix of forced and real excitement while tubers and commentators drum up their content.

If you've spared any moments to watch the livestreams or breakdowns, you've probably seen and felt the primary vibe - disappointment.

We've heard a lot about games no one asked for, remakes most people never craved (but will still probably buy) and various games we've known were coming, sometimes for years. See Starfield and Halo: Infinite. All in all, few surprises.

And as has been the case for the last couple of years with E3 especially, people are looking to Nintendo for redemption of the event (later today).

Now there are various reasons a slowdown in the release of AAA games could be expected in the last year, and I'm certain I don't need to expound upon these. But I think it's also obvious that the rollout of truly new and innovative games has long since slowed compared to, say, the 16-bit golden age. In fact we have an example from the current batch of announcements, in Starfield, which is being specifically marketed as 'the first new Bethesda IP in 25 years'.

Catch that - the lack of new Bethesda IP isn't just a point of trivia, it's a selling point!

I'm not here today to analyze all this or harp on it and wallow in my own disappointments (if in fact that was how I felt). No, my little quest is to draw you away from investment in the notion of new, new, new from people who aren't terribly interested in providing it.

Don't settle for the perpetual disappointment.

How, you may ask.

Well there are a few ways, and most of them have to do with adjusting our own attitudes.

Do I really need hundreds or thousands of hours worth of new games in any given year? Or is that time better spent on my writing? [Insert your creative or other endeavors here]

Do I really want partially finished games released just to satisfy my jonesing for newness? See Cyberpunk 2077 as an example of this. I loved the game and got my money's worth out of it. In fact I think it's the best city in any game I've ever played. But there's no denying the game didn't live up to its potential, and may very well have already missed its chance to make up for that.

Not only does that system of hard release dates set us up for disappointment and result in the abuse of workers, it also feeds into the bad capitalism of game devs intentionally holding back content to sell as DLC, resulting in incomplete games sold as complete. More disappointment.

Do I really need a new game from that particular IP? Halo, Star Wars, Elder Scrolls, whatever. Am I so attached to that IP that only a game in that world, with that set of gameplay mechanics can satisfy me? Of course not! But it's easy to get wrapped up in the brand we like best. There is a slew of indie games to dive into as well, many of them taking risks that AAAs never would.

Obviously my answer to the questions above has become, 'no'. What then? I have all this free time (not really hahahahahah... *laughter trails off...*) and it needs to be full of something.

Pardon me for a moment as I run the risk of sounding like a conservative scold. Don't think I only find value in 'real hobbies' or that I believe 'fun' is a waste of time or 'childish'. Do what you want and accept the consequences. Learn and repeat. It's a little different for each of us.

But games aren't all we have. Get outside. Exercise. Make something with your hands. Play with your kids. Take your wife out on more dates. All of these things, if habitual, will not only fill up your time but introduce variety that makes your game time all the more enjoyable.

I recently picked up Resident Evil 8 after not having played much since Cyberpunk in December. It felt great! I'd gotten a new GPU before Cyberpunk and was pleasantly surprised at the graphical difference between RE8 and the last AAA game I'd played before the upgrade. (Cyberpunk looks good but it's nowhere near RE8's level)

What did I do with free time in the interim? Reading, writing, a little bit of music. And connecting to my next point, some hobbyist game dev of my own.

And that's where I want to end today's message. Just like writing or music or art, if there's a game you want to play and it doesn't exist, make it! Now I realize that's a tall order if what you like is big budget AAA with photorealistic visuals and complicated scripted level events. But, all of the elements of those games are things you can learn to do in engines like Unity or (my personal favorite) Unreal. You could have a low-poly, personalized version of Halo prototyped in a hundred hours or so. For the amount of time you've probably spent on Skyrim, Oblivion, or Morrowind, you could have something much deeper and more complete.

Not to say that's the solution for everyone, just an example. If games have been disappointing you lately, walk away for a bit and spend your time on something else. They'll be there when you return, and you'll find, much like abstaining from soda or donuts for a time, they taste even better after a break and detox, or at least with some variety mixed in.

Take your experience into your own hands, don't let the big publishers dictate how you enjoy the hobby. Don't pay them for incomplete products, and don't think that you are only capable of consuming when God made us all to be creative in one way or another.

As a novelty for you on this fine day, here's a link to the last video in which I and my bros celebrated E3 by mixing the clips with original music (by me). Oddly enough many of the games I mentioned are involved, and there's a clear message in the proceedings that our remix (inadvertently?) pulled out. Enjoy!

And finally, have a good book! 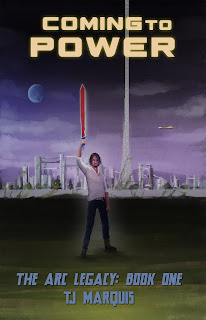 Travel to another dimension and battle the minions of a mad posthuman!