‘21 did not go to plan with writing. ‘22 does not look to be cooperating much out of the gate either. So, I thought I’d offer an update for those interested, since I am not aware precisely who are real ‘fans’ vs. authors following me out of a more comrade-like interest. I don’t want the slow pace of late to let anyone down.

‘21 began with lofty proclamations from myself of finishing up to 6 50k-ish word novels by year’s end. Ultimate result was 2 novels and a novella. Not bad, but not my stated goal.

The strange year held a twin pregnancy in store for my wife, rendering her mostly bed-bound for several weeks, which meant I was a teacher, daddy, wife-helper, and night-mommy. Naturally you can imagine what this did to my output.

After that I had to navigate a career change, which after stressing me out majorly, left me blessedly writing full time! Welcome surprise, but a writing habit thrives on stability, so once again I suffered and failed to achieve my PULP SPEED!

Then, new work started, meaning new work from home routines, and then the princess twins came! So it’s been as action packed as Out of the Deep around here.

I expect to be running slow at least until the princess twins begin eating solids (another 4 months or so), and sleep gets a little more regular. Then I hope to rejoin the 5am writer’s club and jam a little harder.

So, having learned nothing from over-estimating my goals last year, here are the goals for 2020 II:

Clear my mind palate with a pulp liteRPG standalone novella I’m calling Bloodbane. It’s a bit of an homage to Castlevania and Resident Evil, but as I write, entering Act 2, I can already see it taking on its own shape and destiny, so great! The conceit is that a dimension of death-worshiping blood sorcerers begins to overlay itself on the ‘real world’, daring to stand in the way of a burly lumberjack and his family. Instead of a whip, he’s armed with a polesaw, and by the end, well… He will be very entertainingly outfitted I think.

After that, I absolutely must buckle down and finish Arc Legacy II, Song of the City, in which Jon and Bahabe learn their places in Enkann and the world, and Dahm and Rae collaborate on a school for mages. Their stories will intersect in ways that I think will be surprising.

Most likely I’ll do Rev Gal books II and III first(book one is done), in which good people chase destiny and slay false gods. Just because it’s been bugging me that it’s not done.

Then, assuming there are any months left, I’ll knock out Hero’s Metal III: Fear the Four Towers, in which Pierce absolutely will refuse to fear the four towers. You know how he is.

For those counting that’s four novels and a novella. Arc II is the most likely to disrupt the schedule because it begs to be longer than my recent target of 60k words or so, since Arc I was 127k. We’ll see though. I don’t want to not allow it to fall into my new style of pacing, otherwise I’ll get upset and slow completion even more due to stopping and starting. Whatever the length, I know it’ll be fun!

Meanwhile I must finish editing an anthology. And on ‘game breaks’ I hope to work on the Multiverse Crash card game, a planned print and play CCG that will hopefully have content from authors all over the Pulp Rev and Superversive movements.

Is that enough to do? I don’t think so. Let me go look for more…

If you want to support my endeavors, and make it ever easier for me to find the time to do all this writing, grab one of my fun books from the left panel here! 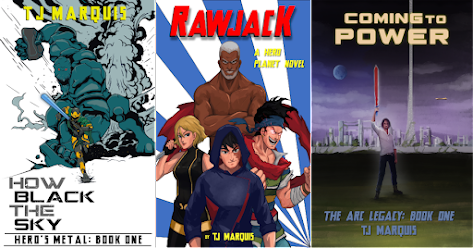