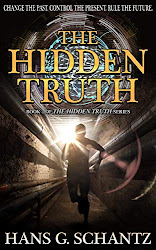 They'll do anything to hide the truth.
When high school student Peter Burdell uncovers a subtle clue in a dusty book buried deep in a forgotten Appalachian library, he realizes someone altered history. Who's been lying, and why?

His discovery lands Peter in the cross hairs of the deadly Cabal whose Deep State agents changed the past to control the present, so they can rule the future. Aided by family and friends, Peter races against the odds to expose the conspiracy and uncover the answer to the most important question of his life:

What is The Hidden Truth?

This is another one I’ve heard a ton about and was finally able to read!

The Hidden Truth is an excellent mystery-turned-thriller with devastating stakes and high tension. Science, history and conspiracy enthusiasts will all enjoy this tale of getting oneself a little too deep down the rabbit hole. And the world is just removed enough from our timeline that readers from both sides of the political isle can enjoy it without getting triggered or cringed out by transparent analogs.

As hinted above, the story begins as a somewhat casual mystery, with only Peter’s imagination and his mother’s worry to hint at worse things to come. The blurb readily indicates the deadliness of our antagonists, but it’s still a gut-dropping moment when their ruthlessness is first revealed. The means by which the author connects Peter to this moment emotionally was a nice touch.

Things really pick up once the full danger of the situation is realized. Peter is way out of his depth, and wisely relies on the rocks that are his parents from that point on. This builds into an even fuller revelation of the antagonists’ EVIL.

The final portion of the story is the most fast-paced and wraps up just enough to be satisfying, while still leaving loose ends for the sequels. I was left genuinely hungry to know the full Hidden Truth.

Our characters’ primary strengths are their competencies and morals. Peter and his friends and family form a group with every chance of surviving the storm via fun things like opsec, hacking, intelligence gathering, and hidden safehouses. Peter gives every impression of growing into a man who gives respect where it’s due and is willing to work as hard as he must to reach his goals - in this case, fighting EVIL.

His parents feel very much like parents, and the writing is clear and clean enough to warrant this as a great read for teens, especially teen boys.

Plot and Character crafted well, my next stop is prose. Schantz has a solid, refined voice and just as much humor as you’d expect from a mainstream-capable thriller. Everything is so well put together and such a pleasant read that it begs for a miniseries or film adaptation.

If I could weigh in on anything, it would be to have condensed Peter’s background stories from the book’s first half a little more. That said, each anecdote that he shares connects with theme or character, so those scenes are far from pointless. I just tend to favor even snappier reads in my crazy house!

Have an itch to take on the Deep State but would prefer to remain alive? Do it vicariously through The Hidden Truth today!