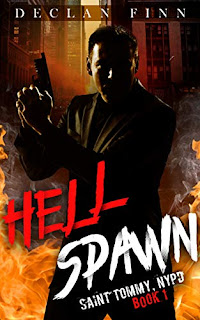 My name is Officer Thomas Nolan, and I am a saint.

Tommy Nolan lives a quiet life. He walks his beat – showing mercy to the desperate. Locking away the dangerous. Going to church, sharing dinner with his wife and son. Everyone likes Tommy, even the men he puts behind bars.

Then one day a demon shows up and he can smell it. Tommy can smell evil – real evil. Now he’s New York City’s only hope against a horrifying serial killer that preys on the young and defenseless.

But smell alone isn’t enough to get a warrant. Can Tommy track down the killer and prove his guilt?

Dragon Award Nominated Author Declan Finn returns with his typical action-packed, Catholic influenced style, in this groundbreaking horror series about an honest, religious man given the powers of a saint to fight demons in the Big Apple.

How do you do forensics on a killer possessed by a demon?

Can Tommy catch the killer before he becomes a martyr? Or will the demon bring darkness beyond imagination to the whole of New York? Read Hell Spawn today and find out!

You don’t hang around in the indie circles I do without hearing often how good Declan Finn’s Saint Tommy books are. Catholic Urban Fantasy Horror is new to me, but it was a wild and legitimately disturbing ride, and a brilliant take on the superpowered detective!

Most importantly, Tommy Nolan is likeable, heroic, relatable and aspirational all at once. He’s the perfect picture of the good cop and model citizen, doing what’s right because it’s right (and he wants to serve Christ). He’s not trying to be a Saint, and is only aware of his destiny because of the traditional Saintly supernatural powers that are beginning to manifest in his life. Finn does an excellent job framing Tommy as both hard-boiled and a do-gooder, with none of the smarmy fluff you might expect from a Christian fiction hero.

The other characters are distinct and efficient in their support of Tommy, and everyone brings a little flavor, including a few that I was sorry to see fall prey to the villain.

The plot is a crime/mystery jam with the pleasant addition of curveballs thrown by the titular hell spawn. You never know what direction the case is going to take, because the demonic entity doesn’t have to follow the rules of nature. This makes for an ever-present sense of foreboding, as we know that almost any horrible thing can happen at any time.

The story wraps up in spectacular fashion, with loss and mourning but the promise of ultimate spiritual victory in the end.

The prose is well-written and snappy, with humor where it belongs and pointed use of violence and gore.

The structure feels good and I never got bored in the midst of this page-turner.

This being outside my usual genres (I don’t do much detective stuff), I found it hard to come up with anything to actually critique. It’s a great mystery and the spiritual elements add just enough strangeness to scratch my itch for fantasy. (I must note that I do not consider the source material for these Saintly exploits fantasy).

If you’re in the mood for a creepy thriller with heart, look no further and get your copy of Hell Spawn now!