In the spirit of New Year's author's posts I thought I'd share my plans for the year.

I've scheduled a minimum of 9 novels to write, aiming for shorter lengths of 50k - 75k on average. This means I must maintain over 1600 words per day to hit the goal.

While this is very ambitious and I fully expect life will slow me down here and there, I know that if I don't aim high, I will end up hitting low. Setting high expectations helps me to leverage what I call 'Writer's Guilt' against myself to make sure I don't do silly things like:

Game instead of writing

Extra nap instead of writing

My main priority is to get the sequel to Coming to Power out, especially since this series seems to have gained the most traction so far. Tentatively titled Song of the City, this story will follow Jon and friends as they enter an era of rebuilding. I want to say more but I fear spoilers.

Second comes my Christian space opera tetralogy. The sequence is titled Revelation Galaxy and will consist of (obviously) four tomes. It's the first project I've decided to write and release rapid fire, complete. Here are the episodes with working titles:

A black ops specialist must escape from behind enemy lines with a revered Prophet and a holy artifact, the Inevitable Revelation!

Chaos erupts on the Mother Planet when all portal gates mysteriously cease to function. Father and daughter must make a pilgrimage into hostile territory to investigate a future the daughter has painted.

A prophetess immortalized against her will returns to civilization after a long sleep, only to find that the flock has lost its way. She must put things back in order so that the Inevitable Revelation can find its home.

Our surviving heroes must come together and dispel all threats to the Inevitable Author's followers so they can live in peace.

I plan to release all four in quick succession, followed by an omnibus edition. If all goes well I will also run a crowdfund to support it and upgrade assets like art.

Next comes the sequel to How Black the Sky, Out of the Deep, in which we learn of the threat from below and follow the many exploits of our plucky Pierce and his new comrades. Are the stakes raised? Oh yeah. Let's just say I have big things in store.

Entering the home stretch we have two standalones and a sequel.

Urban Archaeology (working title) has really intrigued me and I can't wait to get to it. Urban fantasy! A young man is rejected from his dream college and sets out to find a mysterious archaeological site in the hopes of proving his mettle in the field. He's pursued by a three-letter agent who is also a werewolf. The question is, why?

Next up is Driver Chronicles, which takes place in a cyberpunk future that looks utopian... on the surface. This one's fun too, with an engaging romance and some gamelit elements!

And finally, the third in the Hero's Metal series, Atop the Four Towers. If I blurb it I'll give things away so... yeah.

That's a lot to write, and I still have to read and work and, you know, sleep, but we have to shoot for the moon!

Meanwhile, my work with secret game scripts continues, as does my ghost plotting service which to date I've mostly managed via Fiverr. Contact me here, or through other means, if you need some creative consultation and stories generated for any purpose!

Along with all this comes attention to the social media world, which as you know is in quite a tizzy, and in general just trying to get more exposure.

I wish all readers the best in every endeavor. Godspeed!

For an imaginative, character-driven start to an epic science fantasy series, check out Coming to Power today! 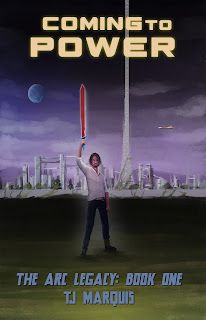