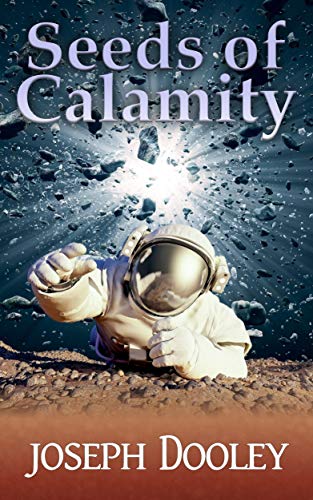 Calamity rides on the back of an asteroid...

In 2216, a natural disaster on Mars destroys a remote steelworker settlement, killing thousands.

A Customs agent uncovers a human trafficking ring, but the real crime is more terrible than she could have imagined.

Felton wrangles asteroids for a living. With his brother Levi and shipmates Blake and Castor, he scours the Asteroid Belt for valuable minerals on a space cruiser dubbed the Marillion.

When the Marillion crew lose financial backing, they’re left to fend for themselves in the dog-eat-dog depths of space. They enter an uneasy partnership with the smuggler Keegan, who’s delivering sensitive cargo for a secretive client.

Joined by Customs agent Greta Holtz, they descend on Mars, where men’s unchecked ambition violently collides with the power of an alien lifeform. Tossed about by forces far greater than himself, it’s all Felton can do to survive, let alone avert a calamity that threatens everything he holds dear...

Joseph Dooley has crafted a smart, hard sci-fi space thriller that put me constantly in mind of a film adaptation. The twists are constant, predictability is low, and the suspense drives the plot harder than an asteroid miner’s drill.

I had the distinct sense of being trapped in a tin can spaceship with our heroes, only loosely aware of events outside the long, tense journey toward supposed safety. This suspense and feeling of being cut off came in large part from the plot being mostly unpredictable, especially if you forgot parts of the synopsis while digging into the book…

It’s easy to believe that Felton and crew will make it to each of their momentary goals, and a true surprise when obstacles and villains crop up to hinder them.

It was also really satisfying to read a competent bit of hard SF after having been immersed in lots of fantasy and other genres for quite a while.

Every member of the crew, and most of our side characters, are unique and memorable, with clear voices and understandable motives. It’s almost too easy to root for Felton, with his adventurer’s heart and blatant disregard for authority, even that of his own brother. Even when his decisions land him and others in trouble, we can’t help but cheer for him to get a win and keep being himself.

The villains are believably villainous, their deeds touching on issues pertinent to our current society.

The only character that left me wanting was Regan, the young steelworker girl featured in the story’s prologue. It wasn’t because she was poorly done - quite the contrary - but instead because of our attachment and investment in her safety after discovering her fate.

Because of the tight Felton-POV we weren’t able to spend as much ‘screen time’ with the pitiable orphan girl as I’d have liked. But I have a penchant for pitiable orphans so…

In any case that’s a function of the plot and structure, and had to be as it was.

The prose is solid and visceral, with a clear understanding of the hard sci-fi elements that exceeds my own. I like that in fiction because I can learn and experience new things while also having fun.

This is also one of the better-edited indie books I’ve read, from development and structure down to individual lines.

If I could ask for anything more from this author, it would be a little more shades of purple prose - tastefully done of course - here and there. It’s not dry by any means, but I had the sense that he could pull off more ‘beauty’ and would like to see it. Naturally this is just a notion of my personal taste, so your mileage may vary.

A few of my comments above could also fall under this heading, which as always is based on my own tastes and current experience.

I beat my brain with a spanner to find something else to say in this vein… but nothing comes.

This is a solid book with constant suspense and wonderful payoffs, nestled in the gritty hull of a spaceship just barely holding off the cold death of space. Read it!