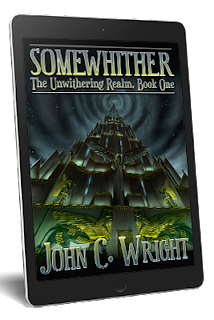 From the description on silverempire.com:

All Ilya Muromets wanted to do was save the girl. Maybe Penny would get his name right as he swooped in to rescue her from her mad scientist father’s machine. And then they’d get married and live happily ever after.

Armed with only a squirrel gun and a samurai sword, he manages to fall into another world entirely. Alone.

Ilya’s only way out is to swear fealty to the dark lord. An action the Stars claim he cannot avoid. They want his recently discovered power for their own, and they’re willing to torture Penny to make him submit.

But Ilya doesn’t believe in the destiny the Stars give him. He’ll make his own, even if he dies doing it.

And in the highest heights and deepest depths of the dark tower, Ilya must discover who he really is.

Science Fiction Grandmaster John C. Wright leads readers through a break-neck coming of age story as Ilya rushes to rescue the girl and save the world. His trademark imaginative world and over-the-top action will delight fans of his work.

Will Ilya find Penny in time to rescue her?

And can they escape the Dark Tower when the Stars know their every move?

This tome has it all - old school science fiction, fantasy, science fantasy, action, metaphysics, hope, horror, humor, gore, whimsy, Christianity, and too many other subtle facets to name. Chances are you've never read a book like this before.

The first several chapters are extremely time-dilated (ie: lots of expertly masked characterization and exposition threaded between somewhat distant plot points) and yet you never feel like 'nothing is happening'. This is in part due to our hero's odd yet refreshing personality. He has a clear, singular goal that he never loses sight of despite myriad setbacks and distractions. Because he knows what he wants and Mr. Wright is able to make every passage drip with mystery, tension, whimsy, or emotion (often all of these at once), there is never the sensation of words wasted or navel-gazing or anything thrown in just as 'filler'. People are not kidding when they name him a grandmaster of sci-fi.

On its face the plot is really quite simple - a young man is thrust into heroism through a combination of his own desires, chivalry, and inherited duty. He must rescue the beautiful princess from the evil sorcerer's tower, picking up allies along the way and learning how to be his best self.

But there's really so much more to it than that. Ancient history, diverging timelines, moral quandaries, and musings about the nature of divinity and the structure of the universe (multiverse) itself. There's steampunk, magipunk, various intersecting magic systems, and of course, faith. And that's what ultimately seals up the whole thing as great to me - Christ's power is displayed as supreme in a way that no typical Christian Fiction I've read can show. I won't spoil how though because it's just so fun to read!

Don't let the mentions of whimsy and faith mislead you though - this is not a child's book. There are intense depictions of evil, graphic violence and some language.

I strongly suggest you get your copy today and dive into this surreal, yet more than real, adventure.