After a few procedural delays, my magipunk superhero future-fantasy thriller RawJack is nearly ready for release!
Here's the cover. Art by the wonderfully talented Bachtard. 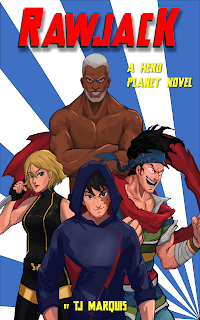 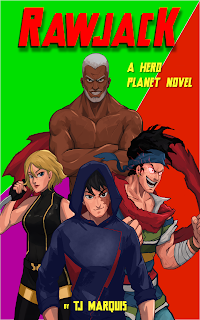 The left one will be used - I'm just sharing the one on the right because I like it...
This one had been swimming around in my brain for a while, with its particularly exciting premise.
We see story after story where supers emerge in the normal world, and in anime we have worlds like One Punch and MHA where they are so ubiquitous as to be a profession.
One day, I wondered to myself what it would look like for supers to be born into a world not dominated by technology, but magic. A place where the average citizen would have access to enough spells and enchantments to make them a match for an equally average super.
Jealousy was my first thought. And economic tension, as the supers are born with natural access to power that other people have to pay for. It's quite a different power dynamic that I think grew into a story I couldn't have written any other way.
Throw in competing motivations, lost religions, a hostile rural landscape, and a little bit of romance, and you've got my first installment in the Hero Planet collection - RawJack.
I plan to continue writing in this world, expanding the stories of the various heroes while keeping the central thread focused on Jack, the first book's MC. I won't number these because I aim to make them less dependent on chronology than my other series, so we'll see how that goes.
Watch my Twitter and Amazon author page for deets, and expect to see RawJack on Kindle in about a week. Paperback to follow.
In the meantime, check out my other heroic stories, How Black the Sky and Coming to Power (Free this weekend!)
As always, thanks for reading.
at July 16, 2020